Ken-shibu is a collective term for two types of dance – Ken-bu and Shi-bu – both of which are performed to accompany Gin-ei. Here, we introduce the characteristics of these two performing arts, which combine the formality of ancient martial arts with artistry expressing sentiments in poetry.

What is Shi-bu?
What is “Ken-bu”?
Ken-bu is a dance performed to accompany Gin-ei recitation while holding a Japanese sword or a fan.

Ken-bu involves stylized movements faithful to the form of ancient martial arts. Basic actions such as the way the swords are carried (paired swords), held and moved bear the influence of techniques and etiquette used in swordsmanship, Iaijutsu and other traditions.

The performer is expected to exhibit the samurai mentality and the spirit, character and style of Bushido. The attraction of Ken-bu could be said to lie in the performer’s understanding of the poem’s sentiment and artistic sublimation of the martial arts format.
The origins of Ken-bu 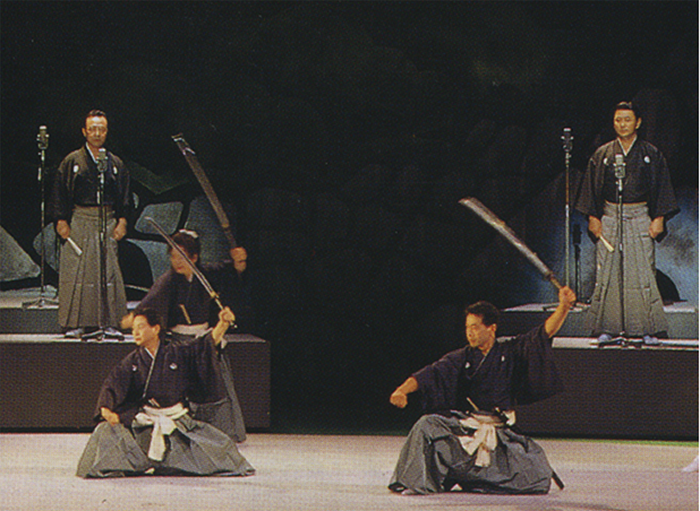 The origins of Ken-bu (in the broad sense) are ancient, dating from the Nara and Heian periods (8th to 12th centuries). That was when the Bugaku dance form and the Kagura music played at Shinto shrines started to evolve, while dancing with swords is also said to have existed in Han Dynasty China.
The established theory is that today’s Ken-bu, performed as an accompaniment to Gin-ei, was started by a swordsman named Kenkichi Sakakibara after the Meiji Restoration of 1868. At the time, martial arts practitioners would hold swordfighting matches, and the story is that Ken-bu proved popular when performed as a sideshow to that.
Some time later, Shokichi Hibino of Kagoshima and Chikashi Chosokabe of Kochi perfected Ken-bu as a performing art, after which various different schools sprang up.
The artistic nature of Ken-bu as a stage performance art was pursued after the war, leading to the excellent theatrical skill displayed in contemporary Ken-bu.
Ken-bu costume and hand props 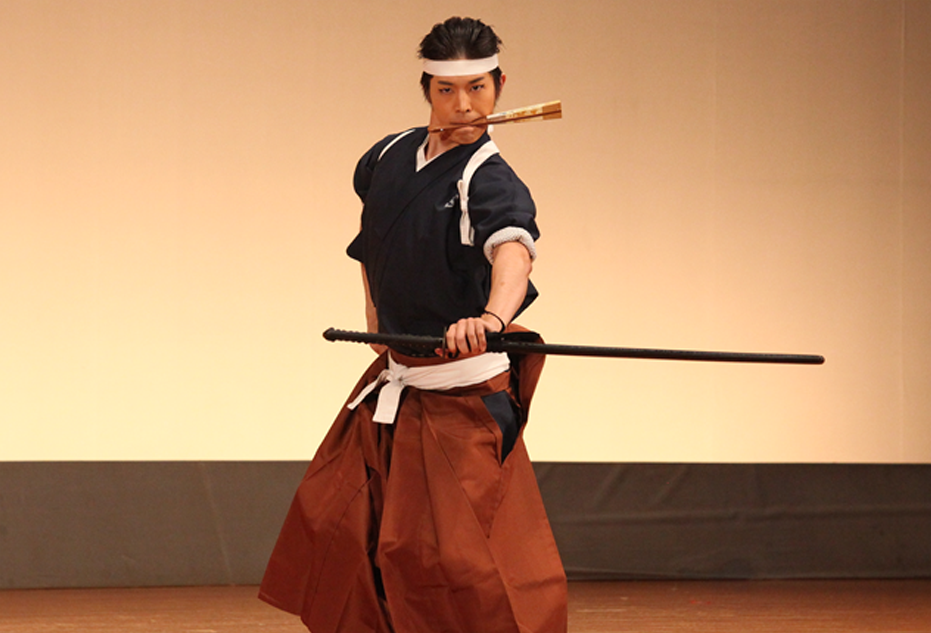 Given the samurai origins of Ken-bu, the performer is usually dressed in Japanese costume consisting of crested kimono and hakama. Performers in recitation contests held by the Nippon Ginkenshibu Foundation are expected to wear Japanese costume including crested kimono, or training costume and hakama.
Although the content of the poem is not physically reflected in the costume, headbands or sashes are sometimes used in fight scenes to express the intensity of the scene.
As the name Ken-bu (“sword-dance”) suggests, the sword is the most important of the hand props used. Of the two swords (long and short) carried by samurai in the Edo period, only the large uchigatana sword is actually held in Ken-bu. The smaller wakizashi sword is worn inside the waist sash. Other hand props may include a fan, a naginata long sword or others, depending on the staging.
What is Shi-bu?
Shi-bu is another dance performed to the accompaniment of Gin-ei, the difference with Ken-bu being that the main hand prop is a fan.
The poems recited in Gin-ei are not only taken from classical Chinese poetry, but may also include a wide range of forms such as waka and modern Japanese poetry. The appeal in this case lies in the merging of dance with recital, as reflected in the phrase “Recite the poem, then dance”.
The performers grasp the sentiment expressed in the poem, then present the world found in that poem in free form, sometimes realistically, sometimes more abstractly.
The origins of Shi-bu 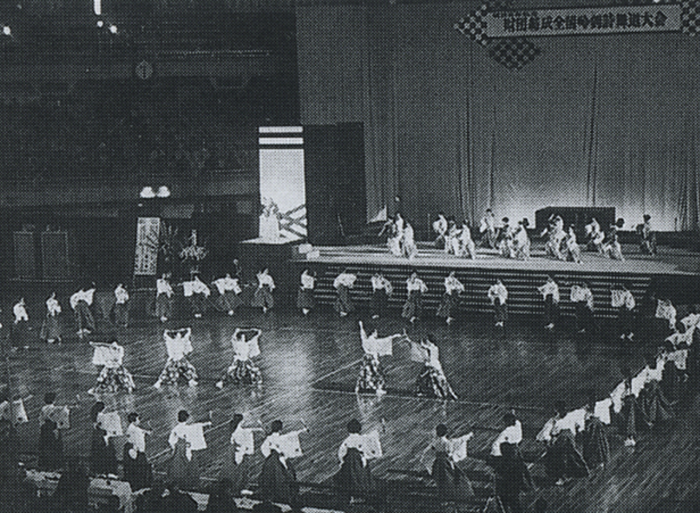 In China, poems written 3,000 years ago and describing the scene of dancing while a poem was recited still survive today. When many aspects of Chinese culture were introduced to Japan in the Nara and Heian periods, Shi-bu was among them.
Contemporary Shi-bu started with the birth of Ken-bu after the Meiji Restoration of 1868. It is said that, when female Ken-bu performers appeared and became popular, the idea was hatched to have them use a fan instead of a sword.
Today, we maintain the dignified style of Ken-bu while developing it as a fully rounded stage performance art.
Shi-bu costume and hand props 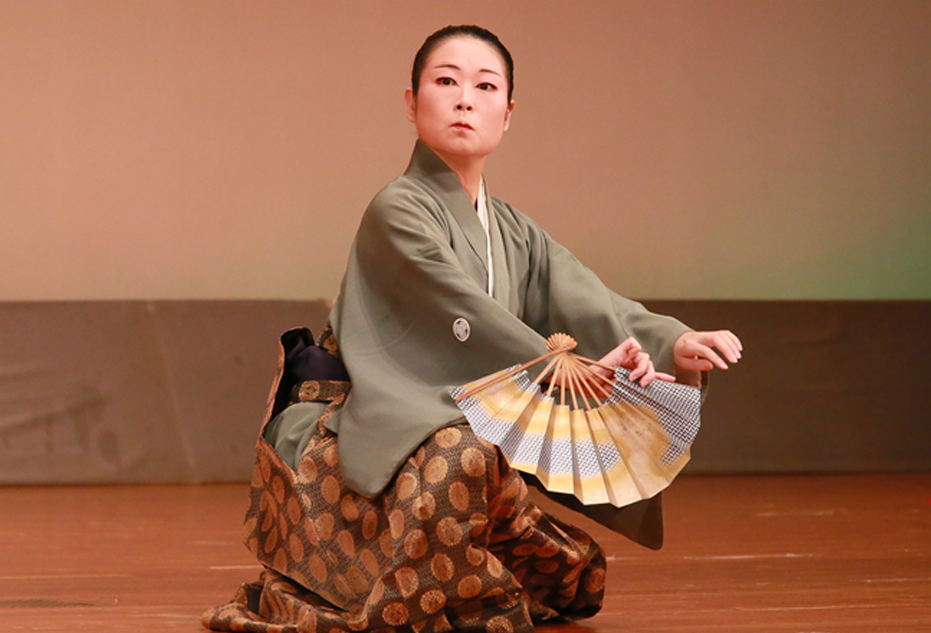 Shi-bu performers in recitation contests held by the Nippon Ginkenshibu Foundation are expected to wear Japanese costume with hakama. Costumes that match the content of the poem and enliven the intentions of the choreography are used. For example, if reciting a poem in the guise of a historical character, that person is realistically represented in the costume; or if reciting a poem in appreciation of a landscape, the spirit of the poem is expressed more abstractly, and so on.
The fan used in Shi-bu is the same reinforced type as used in Nihon Buyo (Japanese dance) and others. Rather than relying on large stage props as in theatrical performance, the fan is used to represent a sword, flute or other object, or as a hand prop expressing the person’s status or role.