Home > What is “Ginkenshibu”? > What is “Gin-ei”?
What is “Gin-ei”?
Gin-ei is a traditional recitational art used to express Japanese sentiment.
Gin-ei can be enjoyed by people of all ages, both young and old. Here, we introduce its appeal, as well as its origins and some representative pieces.
Characteristics of Gin-ei
Gin-ei (also known as “Shi-gin”) is a type of Japanese recitation created by adding melody to poems. Classical Chinese and waka Japanese poems are used in Gin-ei recitation contests, but any other type of poem may be recited, including haiku and modern or contemporary Japanese poetry. A Gin-ei performer will grasp the meaning of a poem and use the melody to recite it with profound and sincere feeling, thus recreating the sentiment and scene of the poem. Gin-ei performers reveal the extent of their skill by interpreting the feelings of the poem’s creator.
When we listen to Gin-ei, we enjoy the experience all the more if we know the meaning and background of the poem being recited.
Click the image to hear a Gin-ei recitation of Oucheng (“Gūsei” in Japanese) by the Chinese poet Zhu Xi.
The origins of Gin-ei 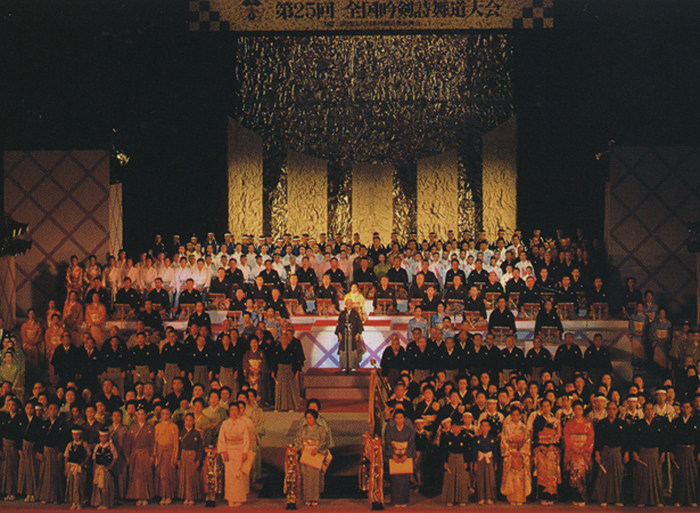 Gin-ei is said to date from the era of the Kojiki and Nihon Shoki quasi-histories of Japan (8th century). Recitations of classical Chinese and Japanese poetry become vogue among the aristocracy of the Heian period (9th to 12th centuries), after which a culture of composing classical Chinese and Japanese poetry spread among the military and priestly classes as well.
It was in the Bunka and Bunsei eras of the Late Edo period (1800-1830) that oral recitation of classical Chinese poetry became particularly popular. The adoption of Confucianism as a state policy led to a boom in studies of classical Chinese poetry. One method of studying classical Chinese poetry was to transliterate the text in Japanese and read it aloud, and this then developed into today’s Gin-ei. Oral recitation of waka poems also started to thrive from the early Showa era (mid-1920s), when reciting both classical Chinese poetry and waka became popular with men and women of all ages. In particular, Gakufu Kimura in the Kanto region and Saishu Manago in Kansai took huge strides toward popularizing Gin-ei, spawning many successors.
Despite a fallow period after the war, new schools sprang up along with Japan’s economic reconstruction, and the Gin-ei population grew dramatically. The Nippon Ginkenshibu Foundation was founded in 1968, since when it has held recitation contests and striven to nurture young performers with the aim of developing this traditional performing art as a national art form.
Gin-ei music and vocalization
The melody used for Gin-ei is formed by lengthening the sounds of certain words or phrases in the poem to express its sentiment, and adding modulations of stress. The musical scale is based on the pentatonic structure mi-fa-la-ti-do, with tempo and rhythm added to suit the image of the poem.
To encourage more people to watch Gin-ei recitals as a stage performance, the Nippon Ginkenshibu Foundation emphasizes three points when reciting: “To recite the melody in the correct scale using stable pitch”, “To prioritize the accent on the spoken word when chanting”, and “To express the content of the poem by adding emotion to musical artistry”.
Deportment and costume of Gin-ei performers
As well as being a stage performance, Gin-ei is also one of Japan’s traditional performing arts, with emphasis on courtesy. As such, the performer always expresses a spirit of gratitude to the audience at the beginning and end of each recitation.
Attire suitable for recitation is chosen. Men normally wear a crested kimono and hakama when dressed in Japanese style, or a double-breasted suit when in Western style. The color need not be black, but can be adjusted to express the sentiment of the poem, for example by using a light green crested kimono for spring recitals or a brown-based color for autumn.
For women, Japanese costume is the norm, with a combination of kimono, obi, obi cord, and neckband in colors, designs and patterns suitable for recitation.
When wearing Japanese costume, it is customary to hold a fan, in line with the conventions of traditional performing arts.